Put those pumpkins to good use this fall 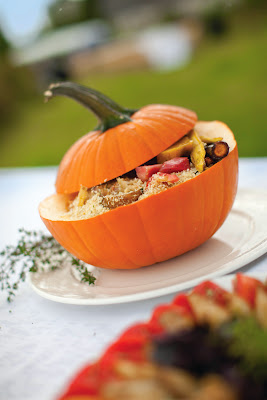 If the bumper crop rumors are true, this Halloween we'll be seeing some great pumpkins, Charlie Brown. The sad thing about pumpkins is many of them get tossed into the trash once the monsters disappear and Halloween is over. What a waste. As gourds and members of the squash family, pumpkins can be so much more than jack-o-lanterns:

* Bowl of plenty. Pumpkins can be used as bowls to hold soup, punch, fruit and even dips. Just cut the top off and scoop out its pulp, seeds and stringy flesh. Once it's clean rub the inside walls of the pumpkin with oil to keep the inside shell from drying out and caving in. Then fill it with your food of choice.

* Pumpkin face mask. Set aside some of that puree in a bowl. Then add some brown sugar and a dash of milk to create a vitamin-rich facial mask rich in vitamins A, C and Zinc.

* Pumpkin centerpieces. Clean out a pumpkin and fill it with soil - only this time do not worry so much about the stringy flesh as it serves to fertilize the potting soil. Once filled with soil add your favorite flower be it a mum or tropical indoor plant. When the pumpkin starts to show signs of rotting, just transplant the whole thing in a traditional flower pot or, if it's a perennial plant, straight into the ground outside.

* Pumpkin soup stock. Most people use chicken and beef as a source of soup stock but the guts of a pumpkin make an excellent stock for vegetable soups. Just remove the seeds from the guts of the pumpkin and put the guts into a pot and fill it with water. Now add the veggies: celery, carrots, whatever other aromatic vegetables you like. It should boil for approximately 30 minutes. When the stock begins to change color, pour it through a strainer. The stock can be used for soups, sauces and a variety of other recipes. 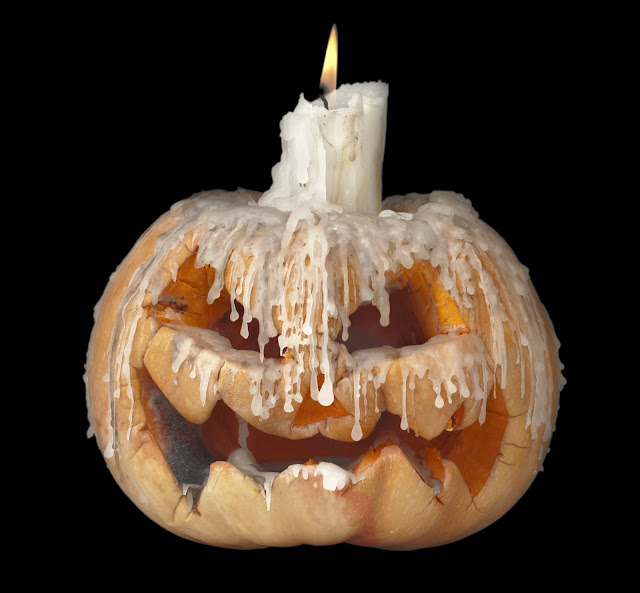 
* Pumpkin compost. Because they are rich in zinc and vitamins A and C, as well as other nutrients, instead of tossing your rotted pumpkins into the trash toss them into your backyard compost bins to further replenish the soil. 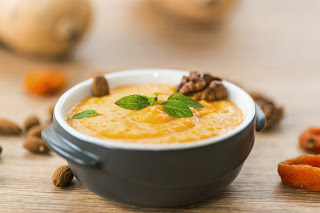 * Pumpkin puree. From baked goods and soups to pie and cheesecake - pumpkin puree can be used in a variety of recipes. To make pumpkin puree, follow the same directions previously given, only once it's cleaned out turn it upside down and place on a cookie sheet. Pour a little water on the pan and bake it at 350 F for about 90 minutes. The skin will become tender and easy to peel from the flesh. Toss the skin in the trash and the flesh into a food processor and blend until you have puree. If you plan on making puree, however, you'll want a sweet-tasting pumpkin rather than a sweet-looking pumpkin such as those in the pumpkin patch. Ask for sugar pie, red kuri, cheese, rouge or blue Hokkaido pumpkins.

* Pumpkin cauldron. Take your jack-o-lantern one step further by turning it into a spooky billowing cauldron. Simply carve your pumpkin and set a large glass jar into the center of it. Then add dish soap and hot water to the jar along with a piece of dry ice. Kids will love the spooktacular effect created by the bubbles and smoke that will come pouring out.

Gina Joseph is a reporter and columnist for The Macomb Daily. Send comments to gina.joseph@macombdaily.com, follow her on twitter @ginaljoseph and visit her beat blog at macomblife.blogspot.com.


Today, the last day on the job for The Macomb Daily's managing editor Ken Kish, has me feeling a tad melancholy and I've only been here for a few decades.

Other reporters have been working with Kish since the days of black-ribbon typewriters and smoke-filled newsrooms.

"Oh, the memories I have of Kish," said features editor Debbie Komar, who started at the newspaper a year after Kish in June 1973. "The hours he spent on the phone talking to irate readers (and somewhere in the conversation there was always the phrase: 'I don't want to argue with you'; the stories of his days as company clerk in the Army; his oft-repeated recollection of a headline written at the Flint Journal about an automobile accident involving a topless dancer ('Bares 2, rams 10'). With the humor comes the spirit of a dedicated newsman, a generous human being, and someone to whom we could always turn, personally and professionally. The newsroom won't be the same."

When I joined the crew at The Macomb Daily, I considered myself to be experienced, having worked my way through university as a reporter for a major weekly newspaper in Canada. From RCMP news and politics to the border patrol, agriculture and the rodeo circuit, I covered it. For extra pay and free film I also worked on the photo desk. After a week of filing news and listening to Kish's newsroom banter, I realized I had a lot to learn, and this was the place to do it.

Early on I covered features and did not report directly to Kish for assignments. Still, whenever I was anxious to cover something new - be it the courts or elections (U.S. elections were so much more exciting than what I was used to) he gave me a chance. It came with warnings, plenty, it seemed. But with every assignment completed to task and on deadline, the warnings lessened. Today, I no longer feel like a reporter under Kish but a colleague among others, such as political writer and columnist Chad Selweski who worked with Kish all of his 28 years at The Macomb Daily concurred. Kish always gave people a chance.

“I interviewed for the job with Kish and Kehetian (longtime editor/columnist Mitch Kehetian, also retired) and it did not go well. I was nervous. I didn’t sell myself,” Selweski said. “When I left, I thought for sure I had blown it. So, I took a big chance and called Kish later to tell him the interview may have been bad but I’m not good in those situations. Look at my clips and you’ll see I’m a good writer. Give me a chance. He took a chance, hired me, and was obviously pleased with the result. For many years he used to always tell that story about me calling back and convincing him to hire me.”

Kish is moving on with his life but left behind will be the quote file – containing many Kishisms. “When we first started having ‘Casual Fridays,’ none of us were quite sure what we could wear and what we couldn’t,” Selweski recalled. “Then, when it was taken one step further – wearing anything you wanted on election night – Maria (Chad’s wife) happened to stop by during one election night shift. Ken was wearing some kind of silky, velour exercise outfit (kind of like a running suit). Maria took one look at him and said, ‘Why is he wearing his pajamas?’”

That remark, of course, made the Quote File greatest hits for that year.

Funny moments like that help to get you through the serious side of covering news and days like 9/11, which I will remember forever. Not only because of the way it changed America and the world, but me. Within seconds of knowing it was no accident, Kish had a list of questions that people would want to know and had reporters assigned to answer them. He was the general and we were the troops, relying on his knowledge and direction.

As trying as the day was for me as a writer, it was nothing to what I felt as a mother. My first reaction was to get to my children, to their school. But, given the time to reach my husband and ensure that my family was safe, I was able to return to the task at hand.


That's the other reason I’ve enjoyed my work here at The Macomb Daily. I’ve had editors like Kish, who never made me choose between my job and my family. He was supportive in other ways too. When my mother passed away, I felt the need to write about it and he gave me the space, literally, for a column.

I don't know what Kish plans to do. What does a general do when he stops being a general? I'm sure given his experience and knowledge he’ll continue to share what he knows with this generation of greenhorns and perhaps learn something new from them.