It's short but sweet!

Check out this first look clip from Disney/Pixar’s new LAVA.

LAVA will open in theaters in front of Disney/Pixar’s INSIDE OUT on June 19, 2015!

Televsion actors were the stars of the Emmys


Movie stars such as Julia Roberts, Woody Harrelson and Matthew McConaughey had VIP seating. But the 66th Annual Pimetime Emmy Awards were all about television and its stars including a long list from 'Breaking Bad" proving voters have a long memory since the finale aired 11 months ago.

Sporting a Clark Gable mustache and obviously enjoying the evening was Bryan Cranston. That actor who played the meth dealer Walter White on Breaking Bad captured his fourth best drama actor Emmy -- tying him with another four-time winner, Dennis Franz - and the audience's attention after grabbing Julia Louis-Dreyfus for a long kiss - as she made her way up to accept the award for outstanding lead actress in a comedy series for her work on Veep.

Here is the full list of winners at Monday's 66th annual Primetime Emmy Awards presented by the Academy of Television Arts & Sciences:

n
AAP contributed to this report
Posted by Gina Joseph at 7:11 AM No comments:

I am a writer.


So naturally I love words.


To this day I remember how excited I was as a child learning new words, big words, like encyclopedia. EN-CY-CL-OP-ED-IA, don’t you just love how it rolls off the tongue. Alas, this is probably why I have not conformed to the condensed version of the English language used when texting. No matter how many nanoseconds it takes, whether it is a text for my editor or a note for the family I must spell it out.


This is why I found a new national survey by Omlet (www.omlet.me), which is a chat app developed by a group of Stanford students interesting. The question they posed to 1,000 adults and young people participating was this, "If I holla at u w/flirty msge 4 possibull date, do u care ‘bout my cr8tive spellin?


According to Omlet’s Digital Flirting Rules survey – most men (58 percent) and women (73 percent) consider funky or very informal spelling to be their #1 biggest turn off, when receiving chat or text messages.


The women in the survey were a little harder on the lack of punctuation and grammar. It was their second biggest turn off at 59 percent, followed by excessive slang (54 percent). One thing the men never mentioned but was a big turn off for the women was messages received during sleeping hours (51 percent disapproved). Fifth-biggest turn off for women was the use of all lower case (50 percent disapproved).


What both sexes did approve was the use of multiple emoticons and emojis, so keep those smileys and winks coming.

Farmer shares his secret to picking the cream of the crop

I should have listened to my grandfather. When I was a kid I would travel with him to area farms to visit with people he knew or to buy bushels of something for my grandmother. Whenever he was buying fruits and vegetables he would try to show me how to make the best selections -- even the best tree to climb for cherries and apples. But I never paid attention and often joked with him saying I didn't need to know because I had him.

Grandpa passed away long ago. And now that I am the one picking out produce I wish - and I'm sure my family wishes - I would have listened. I can pick out a good avocado for guacamole. That's easy but a sweet watermelon or cantaloupe, forget it.

As luck would have it a produce farmer recently offered me a second chance to learn the teachings of my grandfather and I took it.

"This is the first day we've had white sweet corn," said Ken DeCock of Boyka's Farm Market in Macomb Township, pointing toward a green wagon filled with corn that DeCock had picked while the rest of us were just thinking about waking up. Ken's farm and produce stand are named after his father Sylvester DeCock. If you're of Flemmish descent as Ken's father was you know that Boyka is Belgium for little boy. It was the nickname given to Sylvester - who was the oldest of three sons born to Hilaire and Mary DeCock. Sylvester and his wife Virginia had four sons who became the third generation of Boykas to work the farm. They were the entrepreneurs who began selling their fruits and vegetables off wagons parked on 23 Mile Road. Two-years later they expanded their services to include bedding plants and hanging baskets. So began the produce stand owned by Boyka's DeCock Farms & Greenhouses and operated by Ken and his brother Bob. As when their parents were running things, the stand offers bedding plants and hanging baskets from May to June and fruits and vegetables from mid-July to Oct. 31.

How to choose a good ear of corn?

There are several varieties of corn sitting on the wagons outside the family's stand this week including bi-color and white sweet corn. 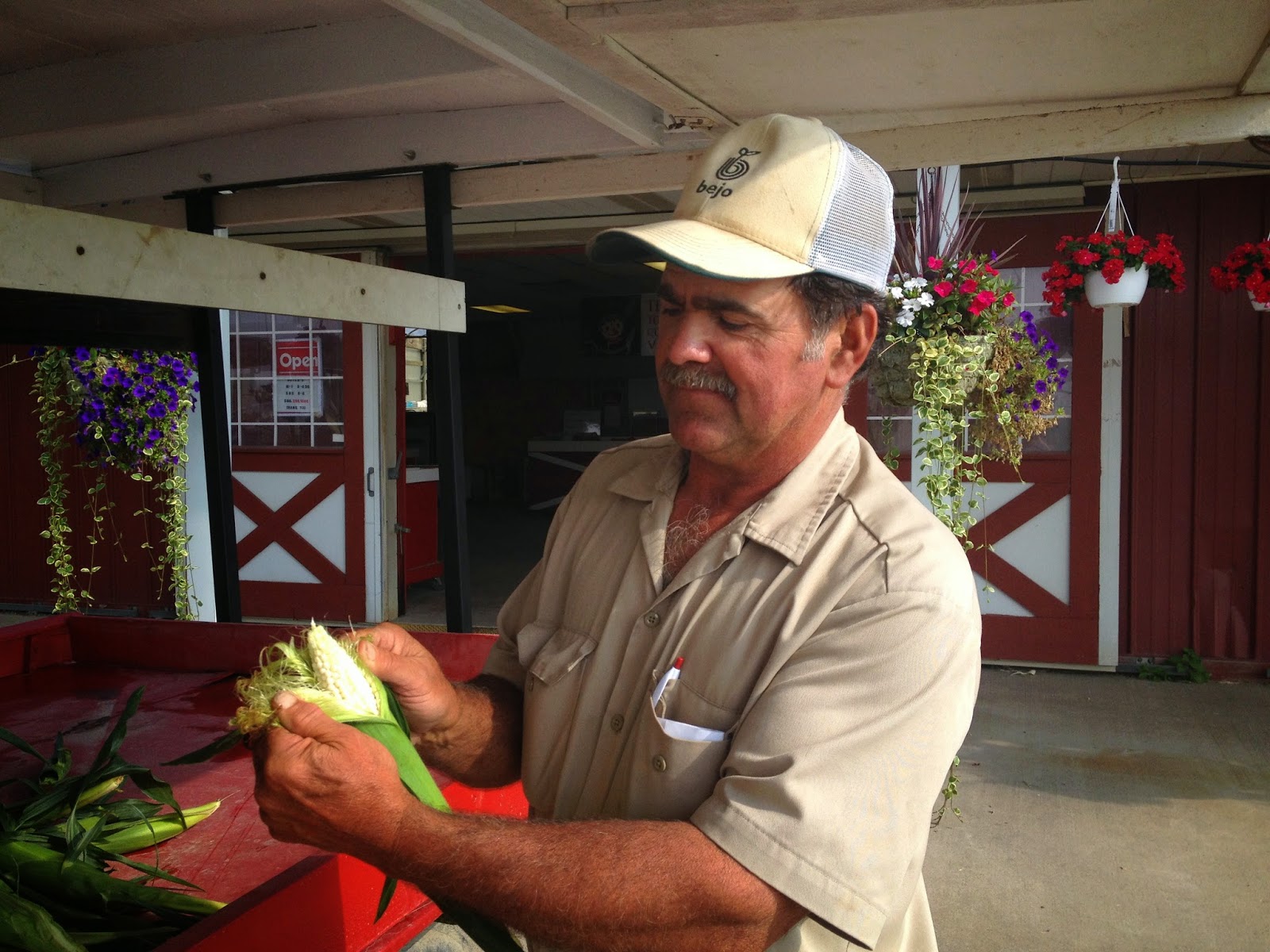 "What you don't want to do is rip it all the way down," Ken said. There's no need for tearing off the husk and if farmers were anything like retailers they would have a sign on their stand warning customers: You rip it. You buy it. Instead pick up the cob and inspect the husk for holes and black marks or blemishes. If you're still not convinced you have a good cob peel back a small section of the husk at the top of the corn and check there for worms or holes. If you cannot see it there chances are it's a good piece of corn. Also, if you like small sweet kernels choose a cob with a narrow top. If you like big kernels choose a wider cone. "I have a friend who likes it so mature the kernels stick to his teeth. To each his own I guess," Ken said. The bi-color and sweet white corn costs around $4.25 a dozen but the cost is likely to go down as more varieties become ready for harvest.

How to pick a good cantaloupe?

It's much easier than one might imagine. At the bottom of the cantaloupe where the melon was attached to the vine you'll see a small circle. If the middle of it has a portion of the vine attached it means the melon had to be torn from the vine and is probably not quite ready. It will be good to eat but not as sweet as one that's had time to ripen. If the circle has an indentation at its center and surrounding edge it means the melon has had time to sweeten and probably fell from the vine. The skin also says much about the melon. If it has an indented circle but a green cast give it a day or two to sweeten as in the case of a green banana. Also, a cantaloupe with a visible netting or web-like surface also means it's ripe for picking. A melon with a smoother surface or balding means it might be ripe but its flavor is questionable.

How to pick a sweet watermelon?

This is a tad more difficult as it requires you to hold the melon with both hands while tapping the side of it. As you tap the melon pay attention to the tone and vibration created by the tap. A green melon will have a high tone and barely any vibration because of its density and lack of water. Now tap another. If you hear a thud and feel no vibration chances are its meat is overripe and saturated with water. What you want to hear and feel with a tap is a medium pitch sound and somewhat of a vibration. A yellowing on the surface and a dry squiggly vine attached to the melon also means it's ripe for picking. If you really want a sweet watermelon put up with the seeds.


"We lost a little of the sweetness in the process of breeding watermelons for convenience sake as in no seeds," said Ken, who added one final tip for anyone shopping for produce.


"Please don't squeeze the merchandise," he said. That won't help in finding a good melon or cob or tomato. It just ruins the produce for the next person - and in some cases destroys the product all together. If you don't know that a ripe tomato is going to be dark red or how to choose any other fruit or vegetable just ask.

"Why do they have to squeeze it?" Ken mused, before heading into the field.

Gina Joseph is a multimedia journalist and columnist for The Macomb Daily. Send comments to gina.joseph@macombdaily.com, follow @ginaljoseph on Twitter